Starting a new year it is always interesting to read the industry experts predictions.  One such article was published by TechRepublic who asked cybersecurity experts for their predictions for the biggest threats to businesses in 2017.  The responses ranged from internal threats to creative ransomware and social media targeting to the industrial Internet of Things (IoT).

The threats to the Industrial IoT is especially interesting, in wake of the Dyn DNS DDOS attacks last October. The automation and scale of this attack not only highlighted vulnerabilities in the security of IoT devices it also brought to the forefront the vulnerability and volatility of our Internet infrastructure in general.

BlackRidge CTO and Founder John Hayes provided us his view on these predictions: “Cyber defense automation will become an imperative for the Industrial Internet of Things (IoT). Attacks by IoT devices will continue to increase in their sophistication, moving from DDoS attacks to theft of financial and social networking account information. Social networks will be under greater attack with an increase of false and misleading news stories posted from both stolen and farmed social network accounts. These attacks will be automated but still under human direction and control, and therefore our cyber defenses must also be automated to have any chance of protecting cyber and digital assets from both the automated attacks and the human element behind those attacks.” 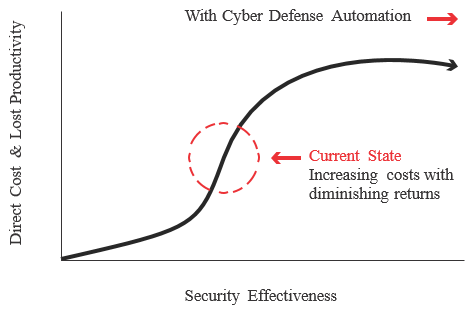 helps makes this realizable goal in a blog and in his Cyber Defense Automation white paper.

BlackRidge was founded to address one of the key vulnerabilities in the Internet, that network connections do not require authentication, leaving servers and networks exposed to attack from the Internet.  BlackRidge Transport Access Control (TAC) enhances TCP, the main Internet protocol, and closes this vulnerability by using cryptographic identity tokens to authenticate TCP/IP requests before a network session is fully established. No conversation takes place unless the party requesting a connection displays a pre-arranged shared secret as part of its initial approach.

In this way, TAC cloaks and protects network resources such as servers from network port scans and reconnaissance and many other forms of unauthorized access. A network becomes a “black hole,” emitting no information of any kind (not even a SYN/ACK packet) until the right to communicate with network resources is established.

You can see how important new cyber defense technologies like BlackRidge will be to securing the Industrial IoT.